Namaste, literally “I bow to the divine in you,” was a word I often heard in Nepal. It was a greeting between gods. I had the chance to manifest the god within when I tried Nepali traditional food for lunch: the Newari khaja set, a solo-size smorgasbord of root veggies, meat, and spices. The dish included samay baji, a blessed food offered to the gods during festivals and family gatherings. The occasion was neither, but our guide decided on the dish as a worthy introduction to Nepali cuisine.

END_OF_DOCUMENT_TOKEN_TO_BE_REPLACED 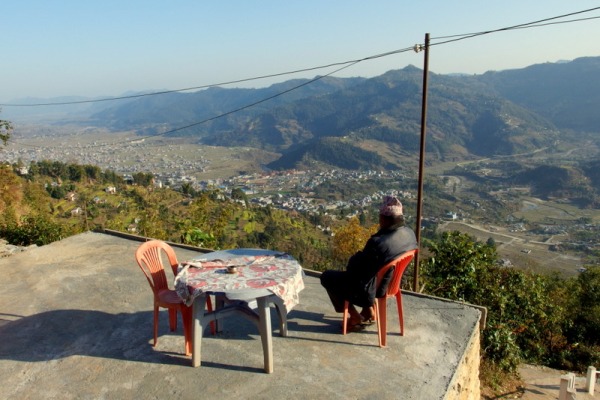 The things that made me go om. One was any form of hiking. For months before my Nepal trip, I trained by climbing up the stairs to my workplace on the 15th floor every day. It turned out I beefed up my quads and lung power only to get on and off the tourist van. My travel girlfies and I did not have the luxury of time to do any Himalayan trekking. 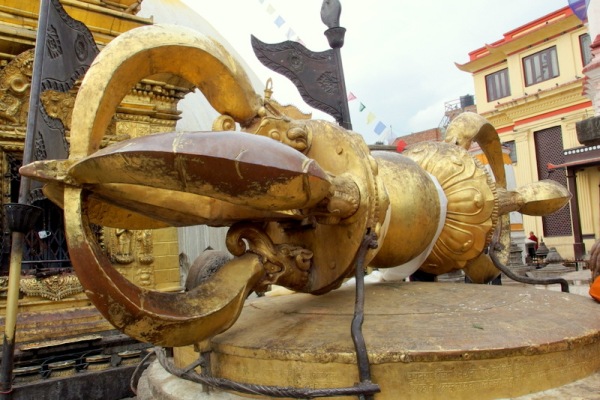 The gigantic, gilded scepter was said to have packed the force of a thunderbolt. This indestructible weapon of destruction symbolized the power that had forged present-day Kathmandu Valley, the mountain-ringed dust bowl that cradled the city. Bhuwan, our guide, called it vajra, a legendary object laid out on a pedestal atop the 365-step stone stairway that led to Swayambhunath, a 1,500-year-old Buddhist temple at the center of Kathmandu.

END_OF_DOCUMENT_TOKEN_TO_BE_REPLACED

The low-hanging sun and a blanket of yellow flowers conspired to set a Pokhara hillside ablaze. This field of gold, one of enchanting natural beauty, was comprised of mustard plants, their flowers looking every bit as bright as the sauce squirted on hotdog. Miles away in Bhaktapur, the dusty, sunny valley was similarly touched by Midas. I was reminded that it took mustard seed faith for me to realize my dream of visiting Nepal, and that dream bloomed before my eyes like a mustard flower.

END_OF_DOCUMENT_TOKEN_TO_BE_REPLACED

A pair of eyes was steadily following us as we circled Kathmandu’s largest stupa: Boudhanath Temple, the holiest shrine for Tibetan Buddhists outside their country. There was nowhere to hide from the unblinking gaze on our clockwise promenade along the circumferential alley. Even at lunch in a nearby restaurant, the steady stare pierced through the window overlooking the stupa. Those Buddha eyes were all-seeing as they were ever-present.

END_OF_DOCUMENT_TOKEN_TO_BE_REPLACED 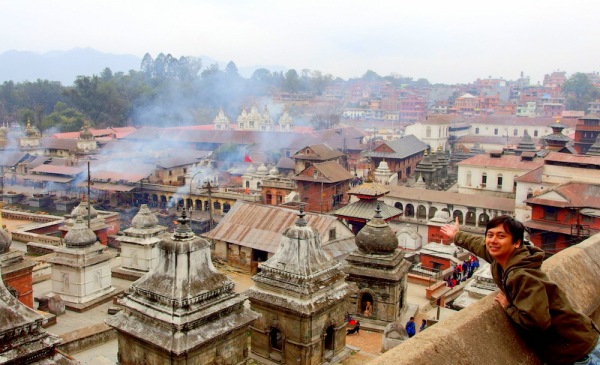 Death was in the air and in the water. Plumes of smoke were rising from several funeral pyres on the paved bank of Bagmati River, choked with litter but revered as a holy river nonetheless, that sliced through Pashupatinath, the Hindu holy of holies in Kathmandu. Curious onlookers had gathered on the opposite bank to witness and document what this temple complex was famous for: the public open-air cremation.

END_OF_DOCUMENT_TOKEN_TO_BE_REPLACED

The red brick terminal exuded that retro vibe. In the absence of connecting tubes, passengers deplaned onto the tarmac. Kathmandu’s Tribhuvan International Airport was decidedly quaint, a throwback to the airports of old before the age of glass and steel. I had landed, not only in a remote kingdom, but in the distant past.

END_OF_DOCUMENT_TOKEN_TO_BE_REPLACED

In one fell swoop, a hawk glided down the busy street and dropped the prey dangling from its claws.

A huge rodent bounced off the trunk of a parked car.

The furry corpse, flattened by the impact, did not even merit a glance from fellow pedestrians. It was a scene straight out of Animal Planet played out in downtown Kathmandu.

END_OF_DOCUMENT_TOKEN_TO_BE_REPLACED

For centuries, life in three ancient kingdoms in Kathmandu Valley – Kathmandu, Patan, and Bhaktapur – had revolved around their respective royal and religious centers: Durbar Square. These kingdoms had since become cities, and each of their squares a UNESCO World Heritage Site. The squares were not kept at arm’s length from the public. No velvet rope, only an entrance fee for foreign visitors. Nepal citizens (I heard they prefered this term over “locals”) went about their daily life in and around ancient temples, palaces, courtyards, altars, and marketplaces in these squares that remained as vibrant today as they may have been in 15th-century Malla Dynasty.

END_OF_DOCUMENT_TOKEN_TO_BE_REPLACED

Today I saw the highest point on earth and met a living goddess. Just your regular day in Nepal.

So went my Facebook status. Nepal occupied not only a sliver of land high above the rest of the earth, but also the earthbound dwellings of deities. Mysticism pervaded the rarefied air in this Himalayan kingdom, where ancient idols at street corners had been smoothed by centuries of veneration, enduring and unchanging through time that seemed to have stalled.

Bhuwan, our guide, had acquainted us with Hindu gods in frozen stances. For a change, he led us weaving through the Hanuman Dhoka Palace Complex in Kathmandu to behold a flesh-and-blood deity called the Kumari Devi, or simply the Kumari, Nepali for the Living Goddess. She was the incarnation of Taleju (aka Durga), the goddess wife of Shiva, who embodied the victory of good over evil, in a vessel of purity – a pre-menstrual virgin.

Say what? A sign at Tribhuvan International Airport in Kathmandu proudly proclaimed Nepal as second to Brazil in water resources. I did a double take, unable to wrap my head around the idea of this tiny landlocked country nipping at the heels of the world’s fifth largest. Brazil was drained by the Amazon and bordered by the Atlantic. I could not even name one river or lake in Nepal, known for its mountains, not bodies of water.

END_OF_DOCUMENT_TOKEN_TO_BE_REPLACED

“Why Nepal?” I had been asked too many times before my trip. I would give a terse reply, “Everest,” name-dropping the world’s highest mountain in the hopes of eliciting at least a streak of recognition on people’s faces. Instead, I was met with quizzical looks. Even at the Air Asia check-in counter at Kuala Lumpur, the airport staff confirmed my destination by asking, “Are you sure?” I wondered if I should’ve taken it as a last-minute escape clause.